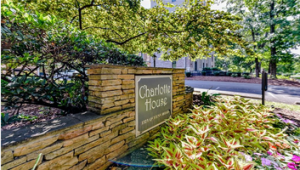 Streetcars or trolleys were a popular mode of transportation and made adjacent real estate extremely desirable. The Charlotte Electric Railway trolley became a billboard for the Dilworth community as it prominently displayed “Buy a home in Dilworth for rent money”. Trolleys remained critical to Charlotte’s development until car No. 85, the last to run, ceased operations in March 1938. This car was used for many purposes over the years and was about to be scrapped when it was located by the Charlotte-Mecklenburg Historic Landmarks Commission and meticulously restored as part of a project to bring Trolleys back to Charlotte. Since 1996, Car No. 85 once again proudly shuttles passengers from Southend, a neighborhood to adjacent to Dilworth, to Charlotte’s urban center.

The city of Charlotte dates back to 1768 when it was founded and named for Queen Charlotte of England. The largely rural farming community became the site of the first yet short-lived gold rush in the nation in 1799, and after the Civil War, it became one of the biggest producers of textiles in the world. By the late 1900s, Charlotte was well on its way to becoming the country’s second-largest financial center behind only New York City.

Dilworth came about in the 1890s when a man named Edward Dilworth Latta designated 250 acres to become the first planned streetcar suburb in Charlotte. He originally called it the Eighth Ward because its grid pattern closely resembled that of the original four wards in the city. In the years that followed, the streetcar and charming homes attracted new residents and the neighborhood continued to grow. Today, it takes up around 400 acres.

Explore the best restaurants, businesses, and activities near Dilworth.